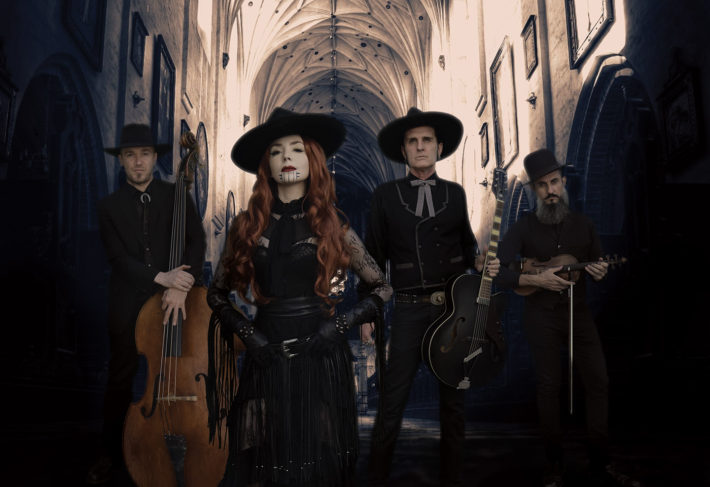 Born By Lightning, the follow-up to the fifth Heathen Apostles album Dust to Dust, contains 5 new songs that explore yet another facet of Gothic Americana: dirty blues. Available digitally November 15th on Ratchet Blade Records, the EP presents tried-and-true musical territory with the title track and the jangly “Devil Comes For All Of Us”, while expanding on the Heathen sound with a trio of hard-hitting sonic lightning bolts: “Death Bell Blues”, “Chosen One”, and “Scarecrow Blues”. Whereas Dust to Dust put the bluegrass of Bill Monroe into the woodshed with the gothic tendencies of Siouxsie & the Banshees, Born By Lightning slinks and slithers to the beat of the blues, with plenty of shouts, hollers, and heavy slide guitar. Singer Mather Louth explains: “My identity as a singer has always been deeply rooted in the blues, and Chopper and I knew for some time that we wanted to delve into the genre (since it is very much a part of American roots music and thus under the collective roof of Americana.) But being the Heathen Apostles, we had to bring things to the dark side, and I feel that Born By Lightning manages to marry our signature Gothic Americana sound with the blues in a way that feels natural.”

Guitarist/Producer Chopper Franklin adds: “We’ve been waiting to do a blues-based record for a while, and we’re very proud of Born By Lightning. I remember seeing The Gun Club back when they were playing small clubs in Los Angeles and that dark, haunting sound was what we were going for with Born By Lightning.” The first single, “Death Bell Blues” (a tribute to band favorite, the legendary Howlin’ Wolf) opens the EP, inviting the listener to toe the murky waters of the Heathens’ blues as a narrative of the impending Apocalypse unfolds. “Chosen One” serves up a more demented and modern interpretation of the genre, pushing boundaries as it forewarns the folly of religious zealotry. The brooding “Born By Lightning” marks the halfway point, churning with the discomforts of facing one’s own shadow, as the subsequent “Devil Comes For All Of Us” brings the tempo back up to a gallop with the Devil blazing a path of indiscriminate death and destruction. The EP closes with the scorching murder ballad “Scarecrow Blues”, a tale of vindictive townsfolk taking fire to the home of a social misfit, only to burn the entire town to the ground.

The Heathen Apostles have always been defined by a balance between experimentation and reverence, and with Born By Lightning (their third release this year alone), the band offers up a powerful and focused new collection of songs to their already impressive hymnal.

You can preview and purchase the dirty blues EP Born by Lightning HERE.