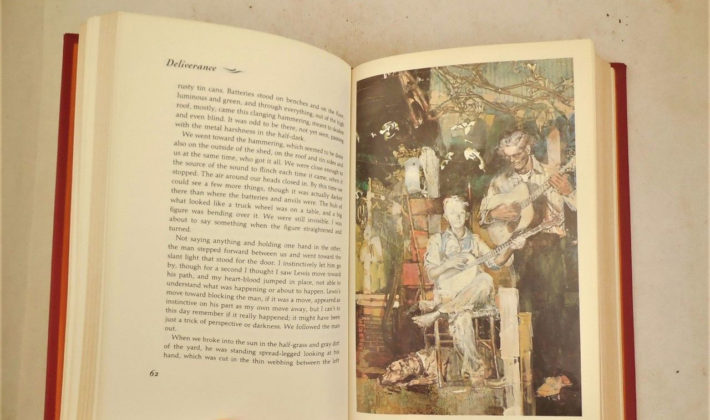 The setting is the Georgia wilderness, where the state’s most remote white-water river awaits. In the thundering froth of that river, in its echoing stone canyons, four men on a canoe trip discover a freedom and exhilaration beyond compare. And then, in a moment of hillbilly gothic horror, the adventure turns into a struggle for survival as one man becomes a human hunter who is offered his own harrowing deliverance. 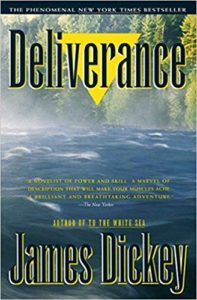 James Dickey’s first novel is an ambitious tale of adventure in which character is tested, quite literally, if preposterously, through action. Three more or less unexceptional middle class, middle-aged men, and one outdoors-man, undertake a canoe trip along the backlands of the South. They treat the weekend as a lark, but, as the title suggests, it is apparent that they yearn, consciously or unconsciously, to be set free from restraint. They are tempted, at different levels of excitement and expectation by the prospect of encountering nature and the elements, as well as recapturing, no doubt, the virility of youth. When the party by chance separates, disaster sets in: the narrator and Bobby, a feckless type, are assaulted at gun point by two mountaineers, one of whom (can he have been reading Sade?) buggers Bobby on a log. The offending mountaineer is subsequently shot by the trusty arrow of the crack outdoorsman, arriving, as they say, in the nick of time. The other mountaineer escapes. It is the narrator’s fate, after sundry skirmishes and Saturday Evening Post elimination courses, to stalk the enemy and deliver the coup de grace.

Dickey’s prose style is muscular, tactile, pungent, luminous, raw, a marvelous instrument, as in the best of his poems, for evoking the towering presence of trees and rivers, earth and sky, as well as the sinuous movements of men under stress. It falters, and here and there ludicrously, when psychological amplification must accompany physical processes; the characters, though naturalistically drawn, seem fitful and dim, the figures of dream or nightmare. That, perhaps, is Dickey’s intent. If so, a good deal more finesse, symbolic or otherwise, would surely seem necessary to sustain, or even make significant, such headlong events. (via Krokus)