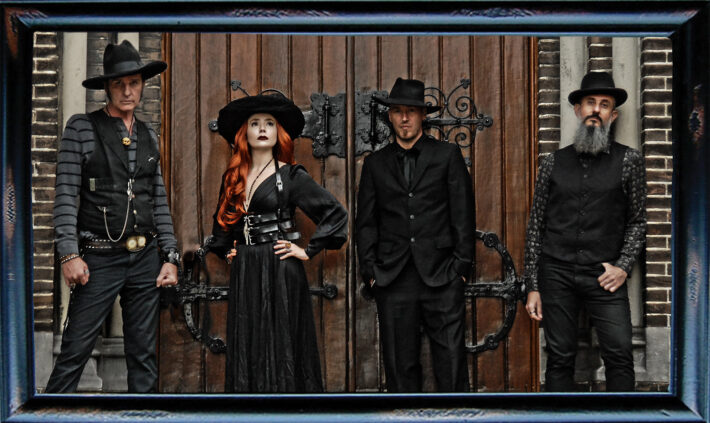 2020 was a year of loss, reflection, and reevaluation. Trying as the times were to have a trio of tour cancellations both stateside and abroad as the live music industry seemingly evaporated overnight, the Heathen Apostles did not let the unexpected gift of time go to waste. To the contrary, the band channeled the turbulent year’s events and its complex emotions into their music, and the result- BLOODGRASS VOL. 3 & 4– is a Gothic Americana album featuring songs at once timely as they are timeless. The album opener “Bad Patch” uses the lyrical analogy of the 1930s Dust Bowl to express the collective desperation brought about by feeling at the mercy of the sort of devastation best described as an “act of God”. “Careful What You Pray For” touches upon the hypocrisy of self-righteous religious dogma and the damage it inevitably brings in its wake. “Black Hawk” moves the album in an introspective direction as Louth sings a tale of transformation by shedding the darkness in order to welcome in the light. As the title suggests, “Demi Monde” offers a return to the occult imagery the band has incorporated since its inception, while subtly paying homage to the fires of Beltane. “Tall Rider” closes the EP on a cathartically optimistic note, plaintively serving as a reminder of the possibility to heal through love. The foot stomping single “Roots Run Deep” casts a lyrical spell in its own right, reminding the listener of the divine within. “Into The Wild” is a primal, incendiary runaway train filled with plenty of snarl and swagger. “Solitary” is an embrace of following one’s own path in life, no matter how lonely the road may seem at times. “No Peace” was written in response to the victims of countless cases of police brutality in recent history that have yet to receive justice for the crimes committed against them. “Shadow Of The Crows” offers an intriguing hybrid of several genres, mixing Middle Eastern and borderline psychedelic sounds with the band’s distinctly gloomy bloodgrass. You can check out the new Heathen Apostles Gothic Americana album HERE.