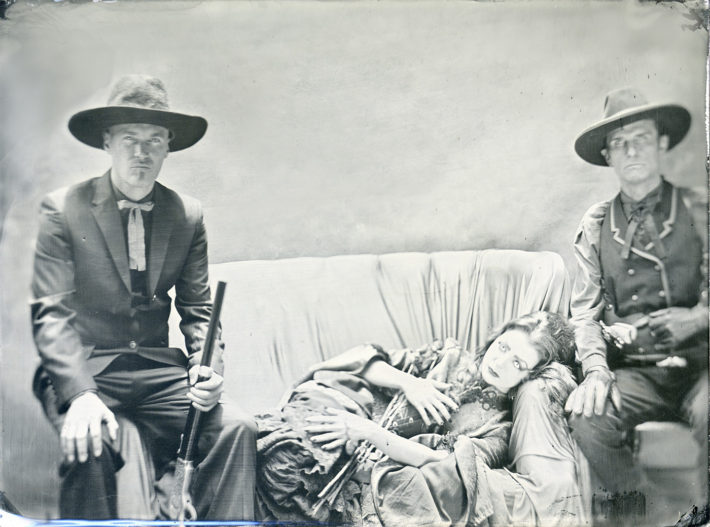 The Heathen Apostles European tour dates have been finalized, the tour is in support of their new album Bloodgrass Vol. I & II (available from Ratchet Blade Records on LP and CD on July 20th). The tour runs from August 3rd to August 19th, with stops in Germany, The Netherlands, Belgium and Switzerland. From the press release for Bloodgrass Vol. I & II:

The Heathen Apostles are proud to announce the release of Bloodgrass Vol. I&II, their new LP & CD out July 20th on Ratchet Blade Records. The album combines the first two Bloodgrass EPs; a reoccurring series, that concentrates on the blending of their American roots and gothic music styles.

Lead vocalist Mather Louth states, “To me, Bloodgrass Vol. I & II represents a concise and effective marriage of both ends of the Heathen sonic spectrum: from the fire and brimstone of Death Came A Ridin’ to the haunting lull of Summertime, this album has something for every Heathen fan. It has also been a true joy to record Dark Days, a melody I had written years ago and now has been fully realized thanks to the band.

“The Bloodgrass series of EPs was our way of expressing the passion we have for the music that has formed the way the Heathen Apostles recordings come to be. Bluegrass, gothic rock, country blues; every style of music we come up with is on this album,” says guitarist and producer Chopper Franklin.

Indeed, Bloodgrass Vol. I & II  album includes their darkened take of Doc Watson’s bluegrass version of the Gershwin classic Summertime, as well as a moving reading of Darrell Scott’s gut-wrenching You’ll Never Leave Harlan Alive. Other highlights are: Death Came a Ridin’ (revisiting the dangerous territory of prior favorites The Reckoning and Death’s Head), Paint the Stars (a dark piece of alt country) and DOA (Exile era Rolling Stones via a Tarantino flick).

Death Came a Ridin’ will be the first music video from Bloodgrass Vol. I & II; it will be directed by revered visual artist Ashley Joncas.

Click HERE for more info, the tour was booked by Rootstown Bookings.