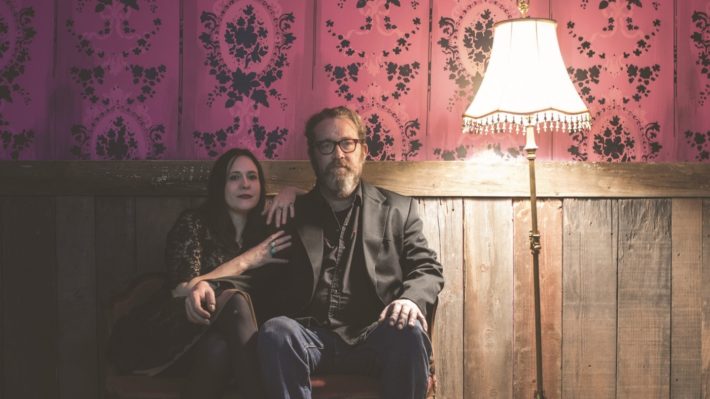 The Handsome Family is an alternative country and Gothic Folk duo consisting of husband and wife Brett and Rennie Sparks formed in Chicago, Illinois, and currently based in Albuquerque, New Mexico. They are perhaps best known for their song “Far from Any Road” from the album Singing Bones, which was used as the main title theme song for HBO’s 2014 Southern Gothic crime drama True Detective by the show’s music director, T Bone Burnett. Husband-and-wife duo Brett Sparks (vocals, guitar, keyboards) and Rennie Sparks (bass, banjo, vocals) formed the band in 1993, along with drummer Mike Werner. The band would later revolve around Rennie, who writes the lyrics, and Brett, who writes the music. Guest musicians complete the band line-up for recordings and live work.

Regarding the band name, Brett said in an interview: “It’s just kind of a stupid name. We used to have this really obnoxious drummer, and he used to call me ‘Handsome’, that was his nickname for me, I think for sarcastic reasons… And he wanted to call it the Handsome Family… and we thought it was funny, too. We thought it was a good name.”

Brett is originally from Odessa, Texas and Rennie from Long Island. The band toured extensively throughout both America and Europe in support of early releases Odessa (1994) and Milk and Scissors (1996). During that time, Brett suffered an emotional breakdown, resulting in his hospitalization and diagnosis of bipolar disorder.

They wrote their third full-length album, Through the Trees, in the aftermath of these events, and included a song inspired by Brett’s experiences in the psychiatric unit. They recorded the album in 1998, using Jeff Tweedy‘s mobile studio, and brought the band to a wider audience. UNCUT named it the “Best New Country Album of the Year”.

And, (according to their website) David Bowie’s recently published notebooks contain a line that simply says, “Handsome Family.” Who knows what might have been?