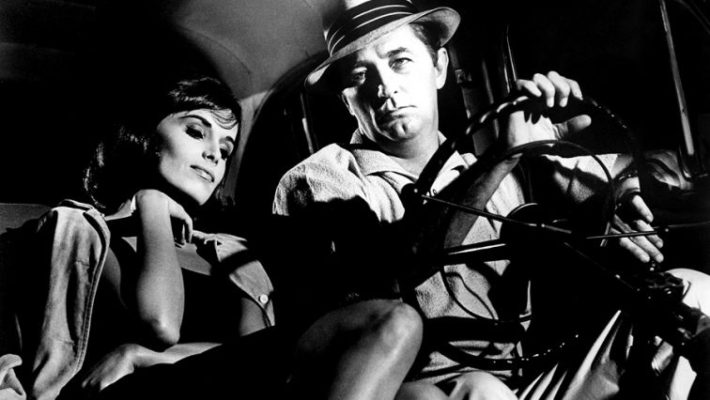 Cape Fear is a 1962 American psychological Southern Gothic thriller film starring Robert Mitchum, Gregory Peck, Martin Balsam, and Polly Bergen. It was adapted by James R. Webb from the 1957 novel The Executioners by John D. MacDonald. It was initially storyboarded by Alfred Hitchcock (who was slated to direct but who quit over a dispute), subsequently directed by J. Lee Thompson, and released on April 12, 1962. 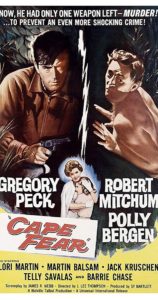 After spending eight years in prison for rape, Max Cady (Robert Mitchum) is released. He promptly tracks down Sam Bowden (Gregory Peck), a lawyer whom he holds personally responsible for his conviction because Sam interrupted his attack and testified against him. Cady begins to stalk and subtly threaten Bowden’s family. He kills the Bowden family dog, though Sam cannot prove Cady did it. A friend of Bowden’s, police chief Mark Dutton (Martin Balsam), attempts to intervene on Bowden’s behalf, but he cannot prove Cady guilty of any crime. This leads to Cady’s reign of terror on the Bowden family.

Thompson had always envisioned the film in black and white prior to production. As an Alfred Hitchcock fan, he wanted to have Hitchcockian elements in the film, such as unusual lighting angles, an eerie musical score, closeups, and subtle hints rather than graphic depictions of the violence Cady has in mind for the family. Although the word “rape” was entirely removed from the script before shooting, the film still enraged the censors, who worried that “there was a continuous threat of sexual assault on a child.” Even viewed today, the massive age and size difference of Mitchum and actress Lori Martin (as teenage daughter Nancy Bowden) is jarring in the scene they perform together.

Bernard Herrmann, as often in his scores, uses a reduced version of the symphony orchestra. Here, other than a 46-piece string section (slightly larger than usual for film scores), he adds four flutes (doubling on two piccolos, two alto flutes in G, and two bass flutes in C) and eight French horns. No use is made of further wind instruments or percussion.

Cape Fear was remade in 1991 by Martin Scorsese. Peck, Mitchum, and Balsam all appeared in the remake. We will touch on that fine remake in a future post.