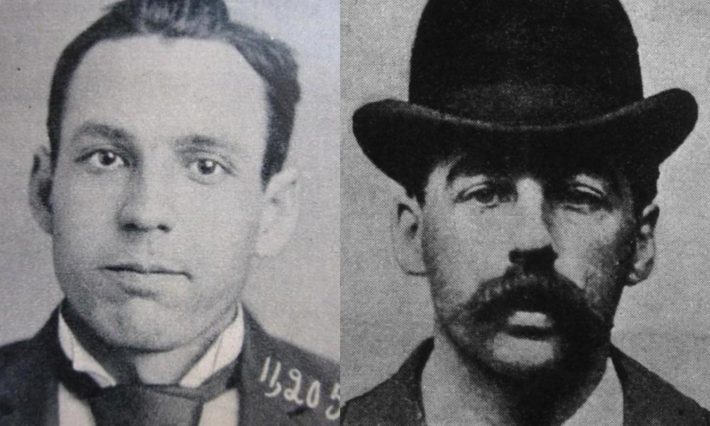 Marion Hedgepeth was born and raised in Missouri. As a young man, he went out west to Montana, Wyoming and Colorado where he learned the art of rustling, robbery and killing. Afterward, Marion headed back to St. Louis where he formed a gang known as “The Hedgepeth Four.” He later became involved with America’s first serial killer H.H. Holmes.

Marion was one of the most debonair outlaws ever to appear on a wanted poster. He was always immaculately groomed with slicked down hair hidden by a bowler hat. He wore a well-cut suit with topcoat. His wanted poster noted that his shoes were usually polished.

The Hedgepeth Four committed a series of train robberies. Eventually Marion was caught and put on trial. Because of his dapper dress and good looks, the courtroom was filled with women and his cell was filled with flowers. But he was still sentenced to 25 years in the state prison.

While waiting for transfer to prison, Marion’s cellmate was serial killer H. H. Holmes, who was awaiting trial for swindling. Holmes confessed to Marion that he had murdered several women. Marion shared the information with the authorities, hoping it would lighten his sentence. This, along with petitions from women, got him pardoned after 12 years.

Riddled with tuberculosis, Marion continued his life of crime, and was arrested in Nebraska, where he served two more years. Now a physical wreck, on the evening of December 31, 1910 Marion entered a Chicago saloon with the objective of robbing the cash drawer. Unfortunately, a policeman interrupted the robbery, and Marion was shot dead.

Hearing of his death, Allan Pinkerton said of Marion Hedgepeth, “He was a bad man clear through.”