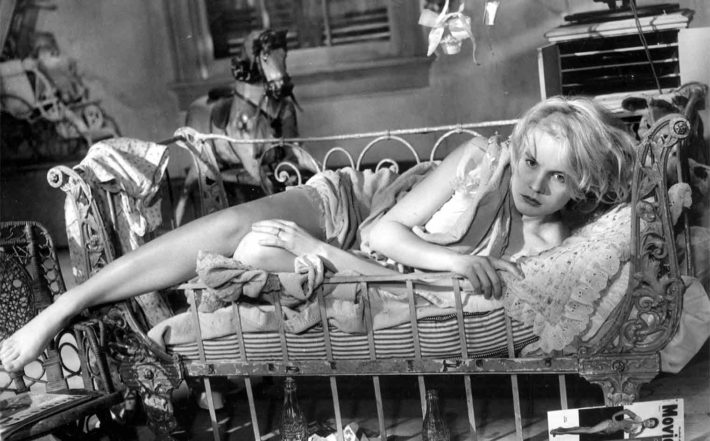 Elia Kazan’s steamy 1956 adaptation of Tennessee Williams’ one-act play, 27 Wagons Full of Cotton, almost never saw the light of day. Controversy swirled around the story of a twisted love triangle between Southern rivals (Karl Malden and Eli Wallach) and a 19-year-old virgin bride (Carroll Baker) who sleeps in a crib, sucking her thumb. Motion picture moral crusaders the National Legion of Decency forced the film from most U.S. theaters and embarked on a nationwide boycott to ban it. Apart from the sexual southern gothic overtones, Kazan’s depiction of a ramshackle Southern homestead and the burning, grotesque figures that populate it contributed to Baby Doll’s scandalous reputation. 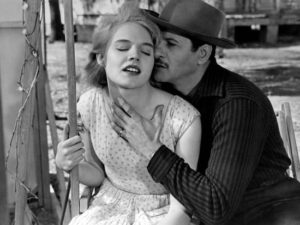 The plot focuses on a feud between two rival cotton gin owners in rural Mississippi; after one of the men commits arson against the other’s gin, the owner retaliates by attempting to seduce the arsonist’s nineteen-year-old virgin bride with the hopes of receiving an admission by her of her husband’s guilt.

The film was controversial when it was released due to its implicit sexual themes, provoking a largely successful effort to ban it, waged by the Roman Catholic National Legion of Decency. Nevertheless, the film received multiple nominations for major awards and performed decently at the box office. Kazan won the Golden Globe Award for Best Director and the film was nominated for four other Golden Globe awards, as well as four Academy Awards and four BAFTA Awards awards, with Eli Wallach taking the BAFTA prize for “Most Promising Newcomer to Film.” 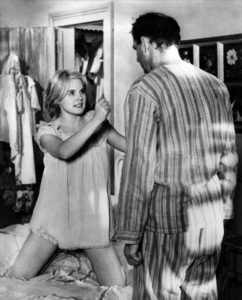 According to Baker, she and everyone else who had worked on the film had “no idea” that the material would be perceived as controversial. It was believed that the main reasons behind the backlash regarded the seduction scene between Baker and Wallach, in which his character successfully attempts to seduce and arouse her outside the farmhouse. There was also speculation that, during their scene together on a swinging chair, that Wallach’s character was touching Baby Doll underneath her dress due to the fact that his hands are not visible in the close up shot. According to both Baker and Wallach, the scene was intentionally filmed that way because Kazan had put heaters all around them because of the cold weather

The film is credited with originating the name and popularity of the babydoll nightgown, which derives from the costume worn by Baker’s character. The film was featured in The New York Times’ Guide to the Best 1,000 Movies Ever Made