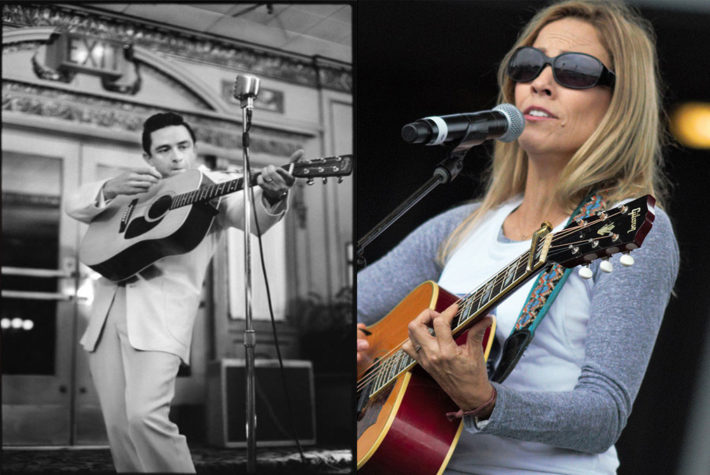 It’s been nearly two decades since Sheryl Crow released her chart-smashing, self-titled album in 1996, but the pop-gone-country chameleon is still soaking up the sun with a brand-new live concert video featuring a collaboration with Johnny Cash on her critically acclaimed album track, the Sheryl Crow with Johnny Cash new song “Redemption Day”. Set to a new arrangement of the tune with Crow and Cash exchanging verses, the video is a compilation of Sheryl Crow concert footage and scenes of Johnny Cash living the good life in the Seventies, all interspersed with gritty, historic scenes of American war involvement throughout the 20th century. In one shot, you see American soldiers running through tall grasses in the jungles of Vietnam, before seeing dozens of bombs being dropped out of U.S. Army helicopters. In another, Cash is shown performing in black and white, later riding a train and contemplating in front of a gravestone in bittersweet technicolor.

The tune was originally written by Crow in 1995 and included on her Sheryl Crow album. “I really experienced something I’d never seen before, which was what it looks like to be in a war-torn area and meet people who had suffered through that,” Crow explains to Rolling Stone Country. “Part of [Hillary’s] goal was to speak to the women and children in those villages. The moment we went into Bosnia, the whole genocide was happening in Rwanda and we sat back and watched it, yet Bosnia seemed to be kind of a stronghold in Europe and we needed the military presence there. I came home really struck by the question of why we invest in some countries and other countries we don’t.”

The same question was still being asked by Cash in 2003 when he decided to cover “Redemption Day,” calling Crow to grill her and gain insight into its inception. “He really wanted to understand what had motivated the song to be written so that he could sing it and he wasn’t just putting his voice but his actual standing in the song. That’s really why I believed everything that Johnny sang; his words had real meaning and real connection to his spirit.”

Although the deliverance of Johnny Cash new rendition was stalled due to his death a few months after recording, it still remained relevant, “…particularly after invading Iraq and nobody really understanding, even after the realization that that had nothing to do with 9/11 and that there were no weapons of mass destruction. That question is always looming: ‘Why are we in areas of the world when we have very little to do with our relationship with that part of the world?’ And that was one of the reasons I think Johnny was interested in the song,” says Crow.

It was ultimately included on American VI: Ain’t No Grave, Cash’s posthumous album released in 2010, and after hearing the recording, Crow was eventually inspired to combine their individual takes into a new arrangement for performing live with the new video. “We talked to John Carter, Johnny’s son, and said, ‘We feel like adding his voice to this and it really brings it home. We’re all feeling the weight of the chaos we seem to be trying to navigate through — politically, socially, everything in the world is supposed to be interconnected, and there’s so much unrest and so much hostility. I mean, he’s singing about peace….”