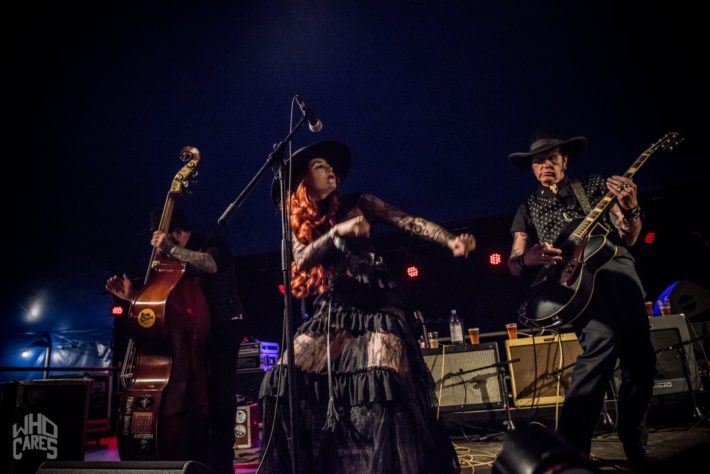 Los Angeles based Southern Gothic Americana outfit Heathen Apostles recently put out their latest studio album, “Dust to Dust,” and soon followed up with a European tour in support of the release. Jeff Goble of Folk N’ Rock Magazine spoke with Mather Louth and Chopper Franklin about the album, the tour, Gothic Americana music, and where the band might be headed next. Now that your European tour has just ended, can you tell us a little bit about what that experience was like?

Mather: In a word: a whirlwind! Which is actually quite surprising, being that it was essentially 5 weeks long and our longest European tour to date. But, it was incredibly inspiring, not only because of all of the sights we were able to take in, but also because of all of the connections we were able to make with fans (both new and existing alike.) Our tour took us everywhere- from the hustle and bustle of big cities to some beautifully remote locations- and that in itself provided a beautiful variety of experiences.

As much as playing 32 shows in 32 days was exhausting, it was equally exhilarating thanks to the adrenaline of performing on a daily basis. As a singer, I was pushed to my limits, but the genuine love for performing allowed me to keep hitting the reset button every night. You can never tell what each day will bring when on tour, so you just try your best to enjoy the highs and (as cliched as it sounds) maintain a sense of gratitude to have the opportunity to share your music with people that truly appreciate it. What was the writing and recording process like for Dust To Dust?

Chopper: While we were on last year’s European tour we talked about what kind of album we wanted the next one to be. The previous album, Bloodgrass Vol. I & II was dark, but also really rootsy, and we thought this one should have a heavier mood.

As soon as we got home I began writing music that reflected that vibe, and then served the demos up to Mather for lyrics. Since we record in my studio we are able to build on the demos, and Thomas and Luis come in and do their parts. By busting it out this way we were able to have the album out for this year’s tour.

Would you say this album is different than your previous works? If so, what sets it apart from the rest of your discography?

Mather: I wouldn’t necessarily call Dust to Dust “different” so much as simply the latest chapter in our story, so to speak. Looking at it from a technical standpoint, certainly the production of it is the most advanced out of any of our releases, and from an artistic standpoint, I think my approach with regards to composing background vocals has evolved quite a bit on this release.

This new record is very diverse. Some songs are faster and more energetic, while others slower and eerie. Did you set out to achieve a specific mood for this album?

Chopper: Yes, we definitely wanted to make a very diverse record, that is something we shoot for most of the time. The first rule we have for a song making it on a record this that it is good, so it was sort of kizmet that the best songs were all pretty different from each other.