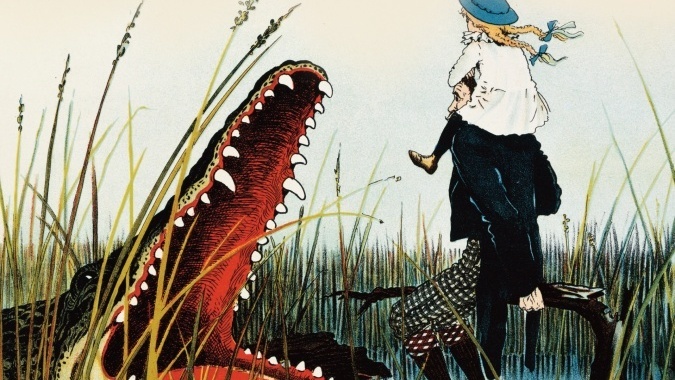 Swamplandia! is a 2011 gothic swamp novel by Karen Russell. Set in the Ten Thousand Islands, off the southwest coast of Florida, it is the story of the Bigtree family of alligator wrestlers who live on Swamplandia!, an alligator-wrestling theme park. The book originated as a short story, titled “Ava Wrestles the Alligator”, published in the Summer 2006 issue of the literary magazine Zoetrope: All-Story. 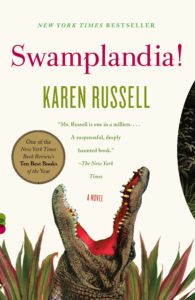 The strange and mysterious Everglades form the essential element for Ava’s journey to the underworld. Ten Thousand Islands is not merely alligator country, it is the uncanny river of grass, the haunting gloom in the ever-changing mangrove tunnels, peat bogs, endless sawgrass prairies, abandoned stilt houses and shell mounds left by primordial Native Americans. The swamp is the otherworldly place for Ossie to meet her ghostly boyfriend, yet it is also her and Ava’s back yard. Despite her Ohio forebears, Ava is a real native of the swamp environment, like the Indians she is dressed up to resemble. Like the Seminoles who lost their leader, Osceola when he was captured by deception, under a flag of truce, a century ago, Ava is also betrayed. She survives because of her unique fitness in this strange environment.

Alternating between Ava’s fantastic voyage in the swamp and Kiwi’s struggle in his over-chilled dormitory room under The World of Darkness echos the inherent liminality of life in Florida, where land and water combine, weather and sea rise change the shapes of coasts, and the results of man-made canals and drainage projects are evident in historic droughts, invasive species and sink-holes. Both island life and life on the mainland hold dangers for motherless children, but the natural and the engineered settings are also magical and mundane worlds. Not only is the small-time carnival world of alligator wrestling over, but the new and highly automated corporate world of “family fun” is largely staffed by interchangeable teens like Kiwi. Home-schooled and well-read, Kiwi can hardly communicate with the mainland boys; even his teacher misunderstands him. Meanwhile, the Chief can barely hang onto a job promoting a tawdry sideshow of aging “beauties” in a casino, but the young and ambitious Kiwi adapts to mainland life, and rises to the status of airplane pilot, enabling him to rescue and reunite the family.

It was one of three finalists for the 2012 Pulitzer Prize for Fiction, though no prize was ultimately awarded. It was one of three nominees for the inaugural Andrew Carnegie Medal for Excellence in Fiction (2012) presented by the American Library Association for the best adult fiction. Novelist Stephen King praised the novel as being: “Brilliant, funny, original . . . It’s every bit as good as her short stories promised it would be. This book will not leave my mind.

In October 2011, HBO announced that it was producing a half-hour television series based on Swamplandia! with Scott Rudin serving as executive producer. In November 2013, however, Russell said an HBO adaptation was not likely to happen.