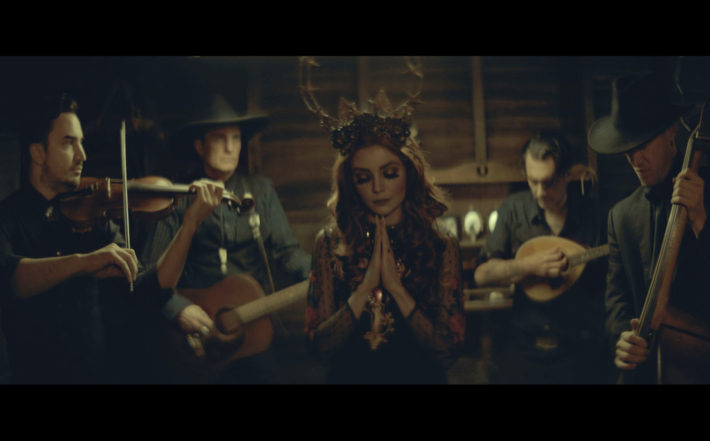 Heathen Apostles is a Los Angeles band known for their unique twist on Southern Gothic music. In a genre with established acts ranging from 16 Horsepower, Elliott Brood, Nick Cave & the Bad Seeds and Munly and The Lee Lewis Harlots, the Heathen Apostles manage to stand out with dual electric-acoustic hellbilly guitars and supernatural-themed bizarro west music videos. 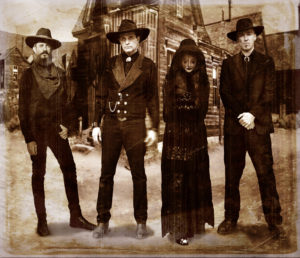 Imagine if a raspier-throated Dolly Parton sang a hard rock anthem about going fisticuffs with Jolene (“Fist City”, a Loretta Lynn original).
Vocally speaking, frontwoman Mather Louth considers herself “very much fostered on the blues and jazz, while also being influenced by alternative and unusual vocalists from a diverse list of genres.”
She was “taken aback by the honesty and simplicity in the vocal delivery” of country music; as demonstrated in sombre ballads like “Dark Was The Night” from 2013’s Boot Hill Hymnal. The track is more a dirge than the classic love/scorn ballads of traditional country; expressing the sting of a lover’s demise.
Still, “I’m not sure if I consider myself a ‘country’ singer-” Mather states. “I’d go as far to say that I sing honestly and from the heart, and hopefully that’s what comes across in the songs.”

Heathen Apostles was formed by Chopper Franklin (ex-The Cramps) and Mather Louth (ex-Radio Noir). The two met at a party in 2012 where Chopper told Mather about the project. At the time, Chopper had to finish recording the Phantom of the Black Hills album he was working on, but soon after “[Mather] was singing ‘Dark Was The Night’ at my studio.” He says he was “blown away by it (the version on our first album is pretty much what we did that night)…and 3 albums and a couple of EPs later, we’re still at it.”
In addition to the production and mixing, Chopper plays the guitar, keyboards, banjo and mandolin. “To get our sound” he says, “I learned to play banjo and mandolin so that I could get them to work well with the heavy guitars. It never seemed to go in the right direction whenever I brought someone else in.” Thus the Heathen Apostles sound was born.
The band’s sound belongs somewhere in the nether realm collectively known as Dark/Alt/Country, as well as in Southern Gothic music. The genre might be considered an evolution from the Cowpunk of the 70s and 80s.  Cowpunk is the (un)official name of a genre that is a mashup of Country and Punk styles. It was pioneered by acts like X, The Cramps and The Blasters. These bands, in turn, were the forebearers of Psychobilly (Demented Are Go, Rev. Horton Heat, etc) and Gothabilly (The Coffinshakers, Cult of the Psychic Fetus, etc).
Alt Country, then, and specifically the Dark/Gothic end, is an offshoot of an offshoot; the backwards cousin of the 1st and 2nd waves of Cowpunk.
According to Mather, “Dark country is simply a return to the folk roots from which the genre was birthed. If you trace folk music back to its European roots, you’ll find countless songs about murder, betrayal, star-crossed lovers, and other macabre subjects. As the Heathen Apostles, we simply build upon that foundation and try to bring it into the 21st century while staying true to its origins.”
Chopper adds that “These days, it seems like Alt Country can mean anything from a singer/songwriter wearing motorcycle boots to a punk band covering Hank Williams songs, both of which are the kinds of things that have been going on for a pretty long time. But I think with Dark Country, or Dark Roots, the music definitely has more of an “alternative” sound. We’ve constantly tried to expand on our sound with different playing styles, instruments and recording techniques, but it really always comes back to the songwriting. As far as the founders, we look to The Gun Club and 16 Horsepower, among others.”
As should be expected, Mather and Chopper’s musical inspiration is on constant rotation. “For me it changes daily”, Chopper says. “I can be listening to Howlin’ Wolf, Bill Monroe and Dock Boggs one day, then Killing Joke, Bauhaus and The Gun Club the next. I’ve found keeping diverse music styles in rotation works best for inspiration, Middle Eastern music and moody soundtracks work well too.” 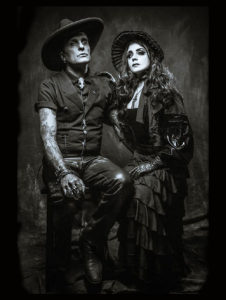 “From a vocal standpoint”, Mather says she always enjoys hearing Howlin’ Wolf, Nick Cave, Billie Holiday, Mark Lanegan, Siouxsie Sioux, Hank Williams, Chelsea Wolfe, and David Eugene Edwards (of 16 Horsepower.).
On their Fire to the Fuse (2015) and remix album Requiem For A Remix (2016) and Bloodgrass Vol. I (2017), the Heathen Apostles give us more than a few covers of their beloved favorites that they make entirely their own. On Fire to the Fuse appears the classic Sonny/Cher original “Bang Bang”; while on Requiem For A Remix for a it is Echo and the Bunnymen’s “The Killing Moon” that gets a makeover.
Mather considers them both classics.
For Mather, much like the music, the music videos of the Heathen Apostles is a universe of its own; with a “blend of influences from the Old West/Victorian era, the occult, fetish and alt culture, Spaghetti Westerns, horror, and memento mori.” One of their most notable videos, “Death’s Head”, seems to play out like one of those classic murder ballads Mather and Chopper referenced. It is a song about betrayal with a hint of folk magic.
“Around the time that we wrote ‘Death’s Head’ ’’, Mather says, “I was going through a time of intense introspection and change, and so when it came time to conceptualize the video, it seemed only natural to include the imagery of a moth escaping from a cocoon (equally as a nod to the song’s namesake as to the metaphorical quality.) Thus, that’s the basis for my character at the start of the video- a moth-like woman in a state of hibernation, being reborn with an almost violent fervor and newfound strength.”
Heathen Apostles is alternative vintage bluegrass/roots music at its finest. They strike a perfect balance between heavier darker guitars and authentic old world charm.
And speaking of the old world, of the old west Chopper says that, “We draw inspiration from many eras, mostly 19th and early 20th centuries, but for me, nothing is as interesting as the Old West. It took extreme courage to travel west, and folks encountered some dark characters and circumstances once there.” By Nadia Carmon of Symbols. Check out the Heathen Apostles music HERE.