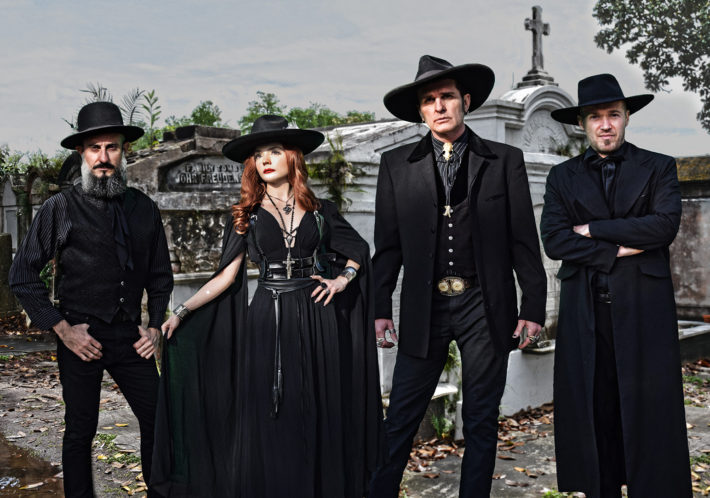 Los Angeles based Gothic Americana outfit Heathen Apostles have released their new single “Paradise Lost” in conjunction with Regime Music Group across all digital platforms. All proceeds from the song will be donated to programs that support the victims of the California wildfires, including rebuilding efforts and animal rescue efforts. The members of Heathen Apostles and some of the staff members from Regime Music Group were directly affected by the deadly wildfires that spread through Malibu and surrounding areas where thousands of people lost property, businesses and nearly two million acres of land burned.

“Paradise Lost is a requiem to those that lost in the fire and also to those that were lost in the fire. Seeing the utter devastation in Paradise and the simultaneous Woolsey fire on television back in November struck a deep nerve within me, and instantaneously, I found myself crying. It was a very primal emotion, that of a crushing sense of loss, and it was overwhelming,” said Heathen Apostles lead vocalist Mather Louth.

She continues, “I had the images of the destruction burned into my dreams night after night, and it was from the combination of those nightmares and countless conversations with friends and colleagues whose lives were forever changed by the fires that the song was written.”

Speaking about the label partnership with Regime Music Group for the release of the song,  Louth said, “We are incredibly humbled and grateful to have Kevin Zinger and his amazing team at Regime Management selflessly partner with us in our efforts. We are all working to make this release a success for the sake of the victims, and we hope that Paradise Lost will offer them a safe place to grieve for their losses while offering support and strength in the face of extreme adversity.”

Since their formation in 2013, the Heathen Apostles have branded the hide of alternative roots music forever with their incendiary bloodgrass music, releasing four full-length albums and a string of gothic western music videos (three of their most popular videos- “Death’s Head”, “The Reckoning”, and “Dark Was The Night”, have garnered 17K, 16K and 15K views respectively.) The latest Heathen release, “The Fall”, was just named EP of the Year by Folk N Rock. In 2018, the Heathens completed a successful tour of Northern Europe- including an explosive appearance at the world’s largest metal festival, Wacken Open Air- proving that their unique music cannot be pigeonholed. The Heathen Apostles have already confirmed over a dozen dates in Europe throughout June and July of 2019 and will be touring in support of their forthcoming fifth studio album.