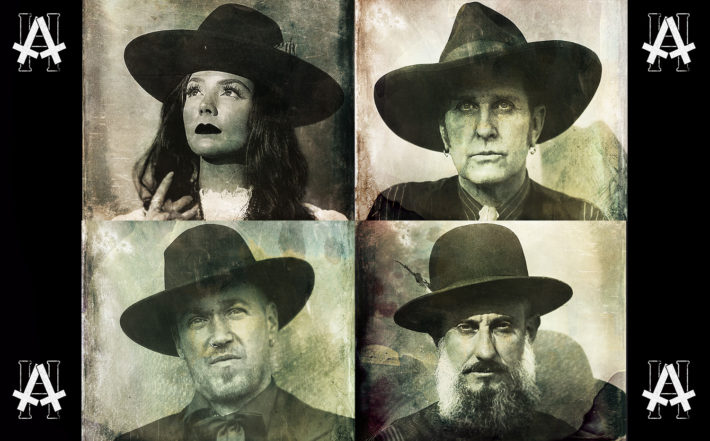 Gothic Americana music is a genre that is fast taking hold around the world, in that it combines the sub-genres of gothic country, dark blues and depression-era jazz. The Heathen Apostles were amongst the first to inject all three into their incendiary music. Their fifth album Dust To Dust opens with the aptly named (and surprisingly danceable) incendiary stomper Burn It To The Ground, and doesn’t let up from there. The Heathens keep one foot firmly planted in driving heavy gothic numbers with Home Sweet Holmes (a recount of  America’s first serial killer) and One True Belief (featuring eerie Middle Eastern-esque flourishes). With Dust To Dust, the band continues to explore the boundaries of Gothic Americana: the jangly Bad Seeds-esque Two For The Road, a spooky Southern Gothic music dirge reinvention of the classic In the Pines, and the lamentful Paradise Lost (written for the victims of last year’s wildfires.) And since no future classic would be complete without an anthem, the Heathens offer up the soaring spaghetti western Rise. As an added bonus, the album concludes with the entire The Fall EP, which was selected by Folk N’ Rock Magazine as the EP of the Year for 2018. You can check out the album HERE.

“I truly dove in head-first on this album, building complex and layered vocal harmonies as a complement to the musical arrangements. Just as the best movies inspire multiple viewings, I sought to create melodies that invite the listener back to hear more and more of the song unfold. With Dust To Dust, we dug the grave a little deeper sonically, but we think you’ll enjoy falling in.”  Mather Louth, vocalist.

The Heathen Apostles will also embark on their 2019 European tour next week, the first show is June 13th in Leipzig, Germany. They play 32 shows in 32 days, including Sjockfest and Picking Bones Festival, and end the tour in Nijmegen, Netherlands on July 14th. Click HERE for more info.