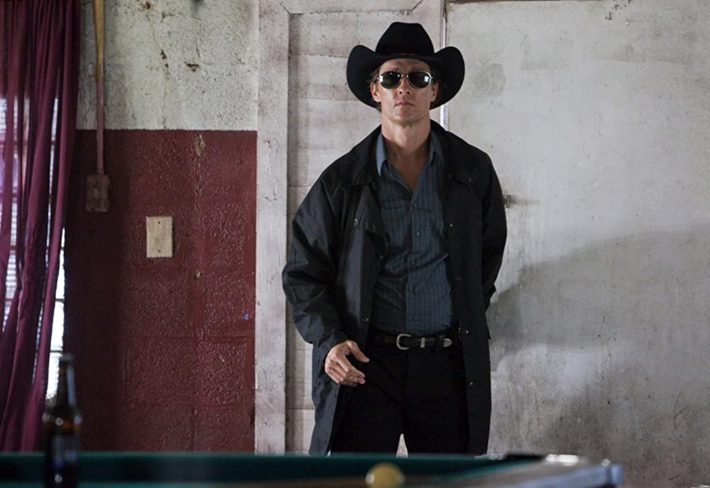 Killer Joe is a 2011 American Southern Gothic black comedy crime film directed by William Friedkin. The screenplay by Tracy Letts is based on his 1993 play of the same name. The film stars Matthew McConaughey in the title role, Emile Hirsch, Juno Temple, Gina Gershon and Thomas Haden Church. Friedkin and Letts had also collaborated on the 2006 film Bug. 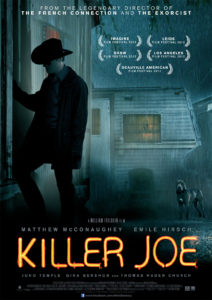 In the United States, the film received an NC-17 rating from the MPAA for “graphic disturbing content involving violence and sexuality, and a scene of brutality.” After an unsuccessful appeal, LD Entertainment announced plans to release the film uncut with the NC-17 on July 27, 2012.

William Friedkin on why he refused to censor his film: “Cutting would not have made it mass appeal. Cutting it would have been the equivalent of what members of the United States government and military leaders said about the Vietnam War. They said, ‘We have to destroy Vietnam in order to save it,’ and that’s what I would have done to Killer Joe. To get an R rating, I would have had to destroy it in order to save it and I wasn’t interested in doing that.”

According to Justin Chang of Variety, “Killer Joe was Letts’ first play, written more than a decade before his smash hit August: Osage County, and the text’s sneer of condescension toward its panoply of trailer-trash caricatures has not entirely abated here,” yet “the film doesn’t belabor even its cheaper punchlines, and the fleet, kinetic visual style devised by d.p. Caleb Deschanel and editor Darrin Navarro emphasizes narrative momentum over cruel comedy. To be sure, Friedkin is clearly amused and appalled by his slovenly, foul-mouthed characters, with their off-the-charts levels of dysfunction and incompetence. But he directs them vigorously enough, pushing them past the realm of caricature to individuate themselves onscreen.”